Don't try this at home

I have more pressing, and more urban, issues to attend to, but I figured I'd post these oddball cars I came across a couple weeks ago until I can organize those more complex thoughts. I have to travel to Kingston to get my car serviced, and in that part of the Hudson Valley I always see unusual vehicles. This time, while heading south on 9W, I spotted this frog-eyed, c.1973 Volkswagen Super Beetle. Someone had painstakingly replaced the standard headlights and taillights with square units. Warping the fenders to the new light shapes called for some real metalworking skill. The maniac highly skilled craftsperson also replaced the stock rear window with an oval window from a mid-1950s Beetle. I don't admire the aesthetic result, but I do admire the patience and technical ability it takes to achieve such seamlessness.

As I pulled away from the Beetle, another oddball sped by. It was one I had seen several weeks earlier near Palenville. At that time, it was traveling in the opposite direction on a two-lane road; by the time I noticed it, the "Gray Ghost" was over my shoulder. The taillights receding in my rear view mirror looked vaguely familiar, but I was stumped. It seemed somewhat Studebaker-ish, but I also thought it could be a rare 1960s European coupe. 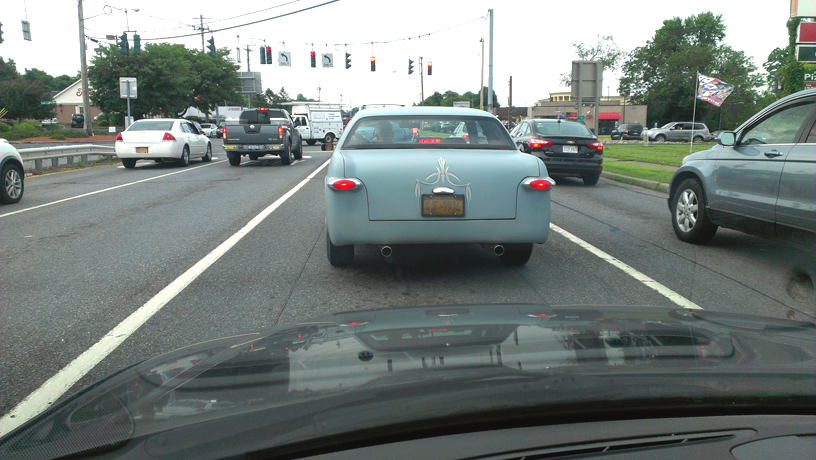 This time I caught up to the Gray Ghost near the Hudson Valley Mall. The taillights again looked familiar, but the car's overall shape did not. From the side (below), I could tell the greenhouse was from a 1990s Mercury Cougar. (Such minutia resides in the same general area of my gray matter as Joe Torre's .363 batting average in 1971. I am not proud of this.) The rest of the car remained a mystery. 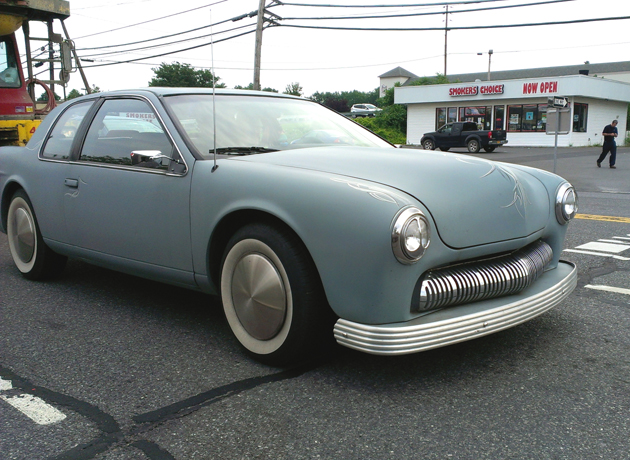 The front was a cartoon version of something 1950-ish. I'd have to count on the taillights, with their unique lozenge shape and tapering trail into the fender, to help me identify the donor car once I could poke around.

The interwebz came through again: the DNA donor was a 1949 Ford, seen below. As with the VW, the technical skill involved is remarkable, as the two cars that were merged are of very different dimensions and were built more than forty years apart.
The lesson here is clear: if one is going to write a blog post that castigates his fellow urbanists for running around the region attending to life management, he shouldn't follow it up with a post on his running around the region attending to life management. We now return to our regularly scheduled urbanism.
Posted by Matthew Frederick at 6:56 PM