Keeping the county in the city: a closer look at Site #6
I've taken a closer look at a potential buildout at 4th and Columbia Streets (site #6 on my previous post) for county offices. The scheme might also be able to incorporate a new city police station and/or courthouse. My main goal was to see how much space could be created with buildings comparable in scale to the existing county office building at 410 State. In other words, I wasn't trying to make architecture or engage the nuances of a more proper urban design undertaking. 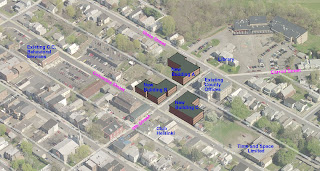 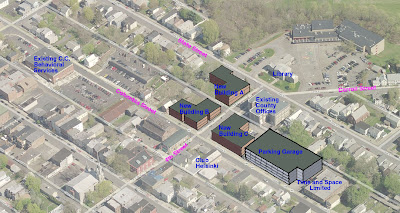 As noted in my previous post, the county also needs about 200 parking spaces. The garage I've drawn below is probably generous (although not so generous to TSL, whose parking lot I've commandeered), perhaps as much as three times that size. So if the TSL site were to become available to build on, the garage likely wouldn't be as offensive as what I've shown. 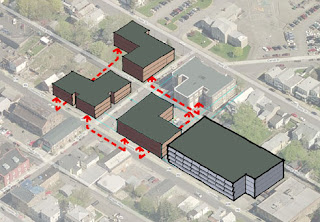 If compelled to live in separate buildings, the county would like them to be linked. Overhead connectors must be ruled out, however, as they improperly territorialize public streets. Instead, city infrastructure allowing, I'm suggesting underground connectors (right), which would be suited to use by employees on foul weather days. The rest of the time, it would be better if workers used the outdoors in moving between buildings to activate city streets. I would discourage any such connector between any of the buildings and the garage, however, as morning and evening commuters should likewise walk the streets.
Next time I will look at the buildout potential of the mid-300 Columbia site (Site #5 on my previous post; left side of above photos).
Posted by Matthew Frederick at 9:13 PM