How to solve the wrong problem

At Tuesday night's meeting of the Hudson Planning Board, Colarusso & Sons put forth a proposal to mitigate the visual intrusion of its gravel operations on the Hudson waterfront. Colarusso provided this existing view of the area; you are looking toward the river with the Basilica behind you: 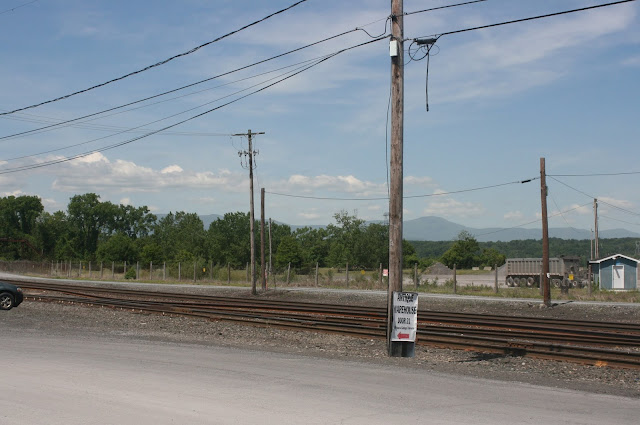 Below is the same view, with Colarusso's proposed vegetative screening added: 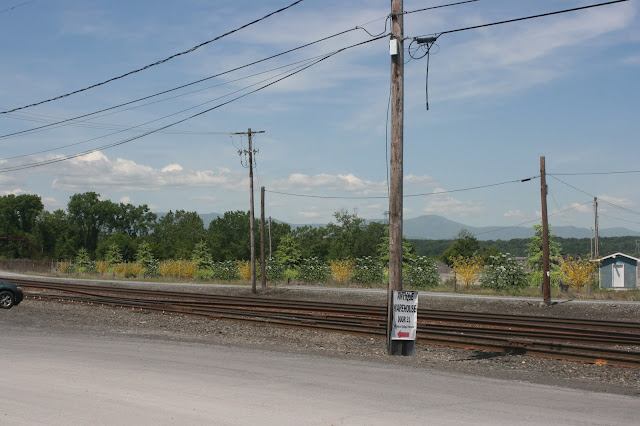 At first, this looked to me like one of those "spot the differences" puzzles I hated as a kid. I would grow annoyed before finding the first one. But I have to admit that the truck at the right edge of the upper image is rather effectively screened from view by the proposed plantings. 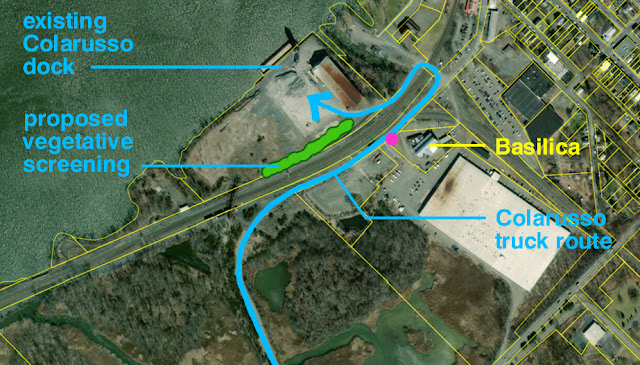 So what's the problem? Well, when you take into account the path the trucks take between 40 and 280 times per day (according to a good source), the screening has little to no effect. Here is what one of these trips looks like from the same location, albeit with a shinier truck: 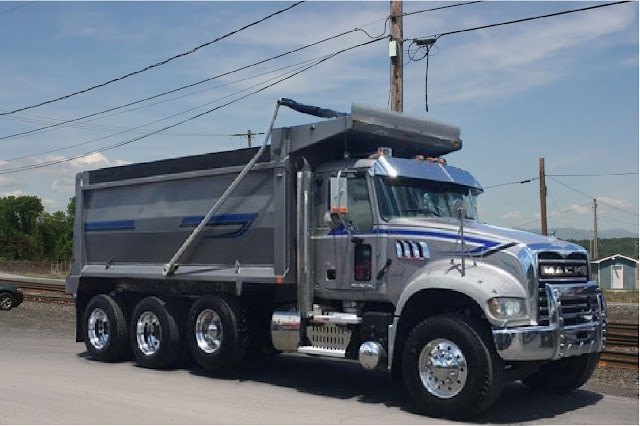 Here is the same view with the vegetative screening added: 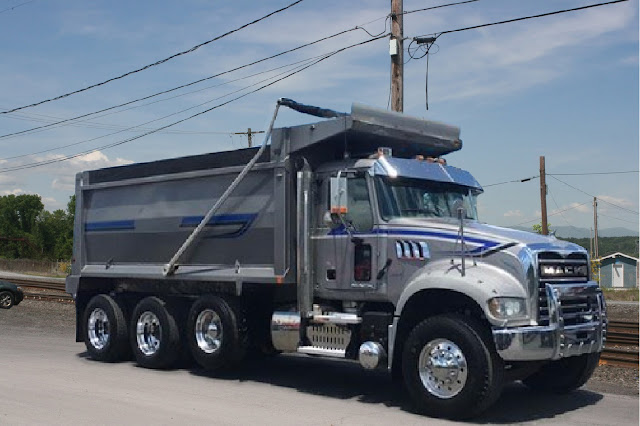 Can you spot the difference? I didn't think so. As long as the truck path remains where it is, the real intrusion into the district will not be mitigated. 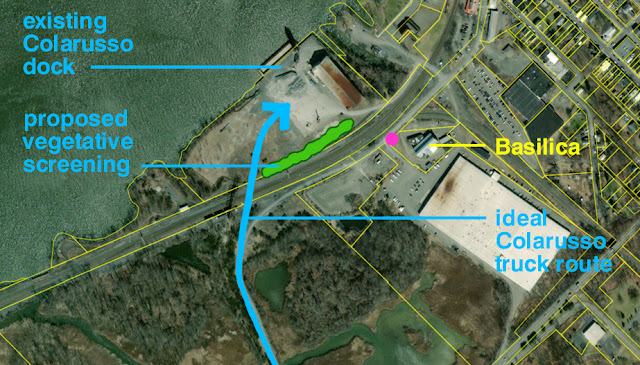 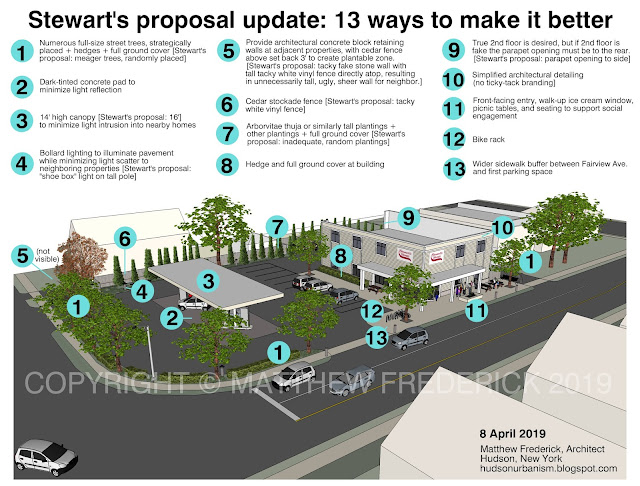 Here is an update to my post of last month. Hopefully, it is self-explanatory enough for now. I will post additional drawings and descriptions of the public outdoor space (#11, ice cream window, picnic area, etc.) as I am able.

EDIT: Here is a closer view of the building as seen from Fairview Avenue, showing the corner entry, ice cream window, and outdoor space. There may have been some confusion last month as to what I mean by "corner entry": there are two doors located a few feet from the front left front building corner. One faces the street, the other faces the gas pumps. (The two men pictured have just exited from the respective doors.) Because everyone comes and goes from one location, sociability is increased, while security concerns for employees are eased, as they effectively have to watch only one entry/exit. 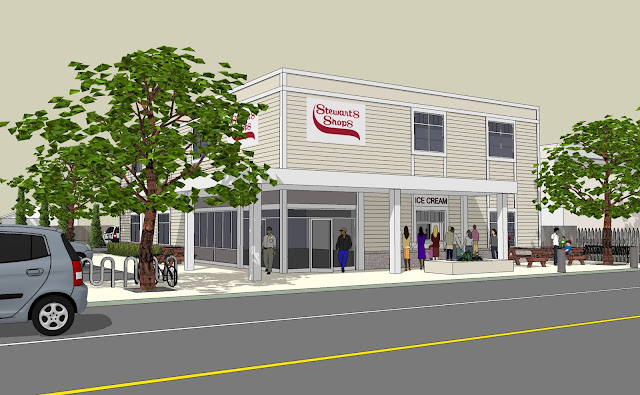 Posted by Matthew Frederick at 6:44 PM No comments:

Posted by Matthew Frederick at 11:30 PM No comments:

Stewart's plan to expand at Green Street and Fairview Avenue has been moving forward. We will see the latest version at the next meeting of the Hudson Planning Board tomorrow at 6:00PM. Stewart's ambitions were greased last year by the enactment of Local Law No. 5. Prior to it, Stewart's, as a nonconforming use in a residential neighborhood, was forbidden to expand. But with the law at its back and now two adjacent residential properties in hand, it is poised to build a vastly enlarged gas station and convenience store on the site.

I've been looking for a hole in LL#5, as I believe that good urban planning should facilitate the development of locally-owned businesses, not externally-owned businesses that remove local money. Not to mention that this will be an unattractive, suburban project inserted into a semi-urban site. Several times I thought I had found a loophole, only to be disabused on my next reading. The only obstacle to Stewart's ambitions I see is for someone to sue the city for "spot zoning," the largely illegal practice of preferentially zoning a specific property. This case seems to tiptoe very close to, if not over, that line.

Until that happens, I am heeding the frequent exhortations of Walter Chatham, the Planning Board's head, to "not let perfect be the enemy of the good." This exhortation has been embraced by Stewart's own representative, who echoed Chatham's axiom to him in initially engaging the board.

In this spirit, I took on a brief study of the site. First, let's look at Stewart's current proposal (right). It is a little hard to read, given that the proposed scheme is overlaid on the existing conditions. But if you know the site you can discern the major pieces. The existing gas pumps and canopy are at the lower left corner, at a 45 degree angle. The existing building, to be demolished, is tucked partly under the proposed canopy. Once you spot the two existing structures, you will realize how much larger the new site will be—double the size of the existing one.

My proposal looks superficially similar, as I could not move the basic pieces very much. But some key tweaks will go a long way toward creating a project that will look like it belongs where it was built. Here is my proposed site plan:

The following explanations are keyed to the plan.

1. New landscaped traffic island. The existing intersection is big, open, and ugly, with lots of asphalt, and the new Stewart's will bring even more paved openness. I propose a traffic island between the existing thru-travel and dedicated right-turn lanes on Fairview to provide softening and better spatial definition. Ideally, the island would be larger than what I drew, with the lower left corner (as viewed on the drawing) squared off to create a more triangular shape. However, trucks turning left from Green onto Fairview need the radius shown.

2.  Revised curb radius at transition of Fairview to Green. This adjustment will narrow this portion of Green Street NW-bound from two lanes to one. The space gained will become a planting buffer that reduces the scale of the intersection and screens views of the gas pumps. Incidentally, there is an existing bus stop on Green Street at the proposed curb cut location. If this is or will be an active stop, it will need to be moved a little farther up the street (for either Stewart's or my scheme).

3. New pedestrian crosswalks, signals, and signage. I've gone back and forth on the best crosswalk locations. Pedestrians usually should cross at corners, but this would force two of the crossings to traverse the traffic island and right-turn lane, which seems awkward and would reduce planting space on the island. So I have shifted them away from the corner to allow pedestrians to cross the streets perpendicularly.

4. Geometry tweaks. It's hard to tell on the Stewart's plan above, but the proposed gas pump canopy is skewed a few degrees off the geometry of the houses on Green Street. I suspect the proposed building is similarly skewed. That this is hard to discern might make it seem it can be ignored, but this is precisely the kind of thing that causes a building to subliminally convey, in real life, that it is alien to its surroundings. So let me put a finer point on things:


a. Set the gas pump canopy and the Green Street facade of the new Stewart's building exactly parallel to the facades of the existing houses on Green Street. Ditto for all parking spaces, interior curb lines, etc.

5. A two-story, flat-roofed Stewart's building. Stewart's initially proposed its ubiquitous, low-slung, suburban-style prototype (top right). Negative reactions at an earlier planning board meeting led Stewart's to suggest a version of its flat-roofed Troy store (right bottom). This is indeed more urbanistically appealing, although the second floor isn't really a second floor and the entry facing the sidewalk isn't really an entry. In defense of the latter, two entries are a security nightmare for a business that has only one or two workers on the premises. If you're Stewart's, you're going to have only one operating entry and it's going to face the parking lot. But if you're an urbanist, you want the entry on the sidewalk. With this in mind, I propose the following adaptation of the Troy prototype.

The major change is a single corner entry in lieu of two separate entries or one entry facing the gas pumps. This would give the store a reasonably urban sidewalk presence while allowing it to conveniently serve customers approaching from the parking lot side. Stewart's already has corner-entry stores, including one a couple miles south of Hudson at Routes 9G and 23, so this is not at all a stretch.

A modest stretch is a walk-up window for ice cream service. But ice cream is in Stewart's roots, and so is engaging communities in a personal way. A gesture like this will go a long way toward making this store look like it belongs where it is built, and will help turn the sidewalk into a truly friendly space.

A greater stretch, which in an ideal world would not take this project to the breaking point: how about a real second floor with an active dwelling unit or commercial space?

If I had time, I would study the Fairview Avenue setbacks a little more. On the one hand, I am inclined to match the setback of the main building and entry "porch" to the houses and porches a couple doors away on the same side of the street. However, siting the Stewart's slightly closer to Fairview than the existing houses helps block their view of the ugly gas pump canopy, and helps give Stewart's an adequate footprint to do business.

6. New, mature trees along Fairview Avenue and Green Street. I believe I have heard that Stewart's will be making a contribution to the city to maintain the Green/Fairview intersection. I suspect that any such monies will be meager, and will go into the city's general fund—i.e., they will disappear. Instead, there needs to be a substantial, dedicated, up-front payment by Stewart's to cover the complete planting and landscaping of the site and intersection (trees, traffic island, etc.) as well permanent annual funding for replanting and maintenance. All the better if these monies and responsibilities go to a neighborhood group that takes personal responsibility for it.

And there you have it. Not fully urban, but more urban than Stewart's proposal. Not threatening to perfect, but definitely "gooder." Which should satisfy all involved.
Posted by Matthew Frederick at 3:59 PM 9 comments: