I've enjoyed two trips to the relatively new Park Falafel and Pizza, on 7th Street facing the Park. The falafel was very good, the pizza a tick above average. I'll give the pizza a second try soon in case I happened to have it on an off night.
I remember seeing this building on the market earlier this year. As I recall, it was a foreclosure, asking price of 89K (I think). I am told that the building was pretty bad inside, but the location is excellent. So it was good to see it turned around so quickly, particularly given the demise of the pizza joint across the park sometime after my first visit to Hudson in 2009 and before I moved here in September 2010.
The storefront renovation is simply and effectively executed--a good lesson in hitting one's design marks without breaking the bank. Inside, large color blocks, muted somewhat from primary tones, strike an appropriately jaunty note for informal dining while helping create a brand identity. (Note to Kennedy Chicken: If you ever renovate, look here first.) 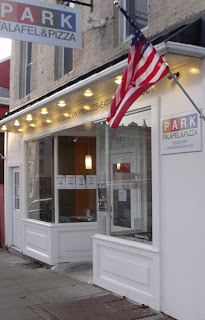 From what can be seen on the MLS, it appears that the apartments on floors two and three were renovated--good to know when there are so many substandard units in the city. But I am left wondering why most of the building exterior was ignored. While I don't expect the uneven settling of the brick facade to have been repaired (rarely a cost-effective undertaking), the rest of the building should not have been left in such a shabby state. 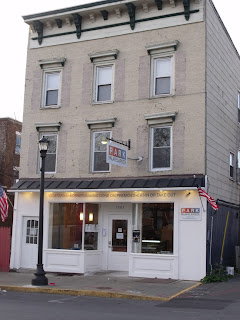 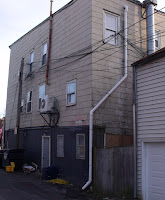 Perhaps the building owner (I don't know if this is the same party as the restaurant owners) has plans to address this and hasn't gotten to it yet. With a bit of work, the building could be an amenity for the whole city, not just for those seeking a reasonably priced dinner, given its prominence at the busiest entrance to Hudson. Personally, I'd like to see the signature color blocks used as a bold color scheme for the building exterior. The more visible the building, the more people will visit the restaurant and the more interesting and alive this little stretch of Hudson will become.
Posted by Matthew Frederick at 6:20 PM 1 comment:

I hadn't used my camera for purely aesthetic purposes in a really long time (years), so the other day I took a walk around Hudson to exercise my eye. The camera frame compels one to make the most elemental and important decision about a composition: what's in and what's not. 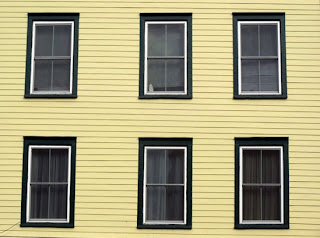 I noticed the clothes iron in the upper middle window while having coffee at Swallow, and liked that it disrupted and humanized the repetition of the facade. I came back later with my camera. 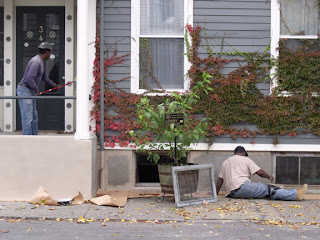 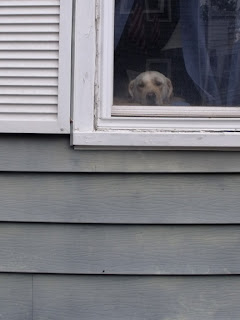 A lonely spectator... wish I had had my polarizing filter with me. 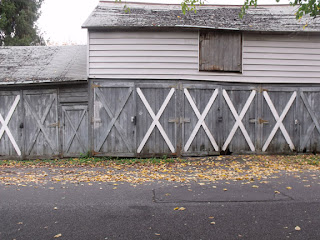 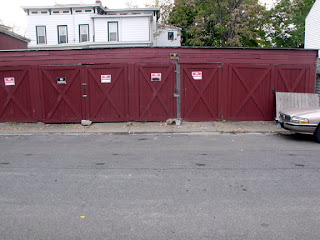 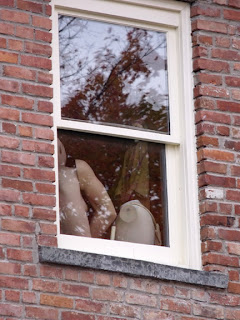 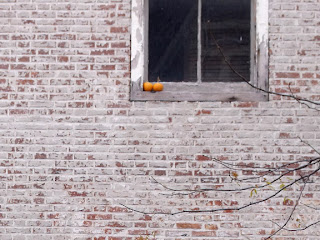 This house looked unoccupied... who put the pumpkins on this second floor sill? 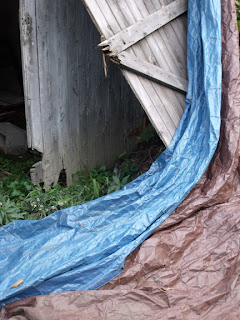 This shot of some tarps on Partition Street is my favorite. They look like flowing water. Someone came onto the alley and seemed surprised I was there. I told him I liked the way the tarps looked, and he said, "Well, you're the only one." 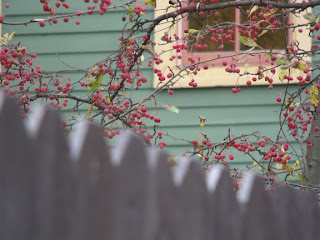 A peek over a fence. 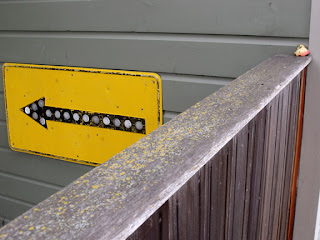 And another... the "leaf" at upper right is actually a rotting piece of fruit with an insect on it. 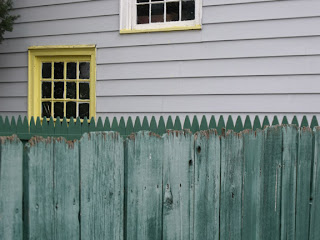 Another favorite. I like how the organic jaggedness of the foreground fence counterpoints the more regimented pickets behind it. Not sure if I should edit out the tree at upper left.
Posted by Matthew Frederick at 12:20 PM 2 comments:

I came across this nifty little house on lower Union Street the other day. It is only about ten feet wide and the ground floor looks barely tall enough to stand up in, but I found it rather appealing. Note how carefully it is composed, with all elements in perfect symmetry: the center of the porch, the bay window, and the brackets above align precisely. Even the squatness of the ground floor contributes to the whole, as it makes the bay above it seem all the more ambitious. 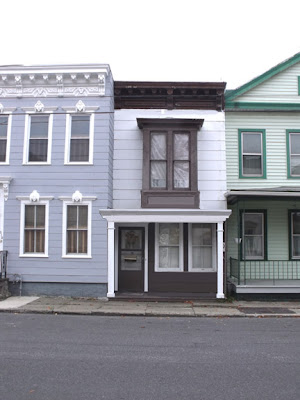 Actually I'm fibbng; the image above was Photoshopped. The real house looks like this: 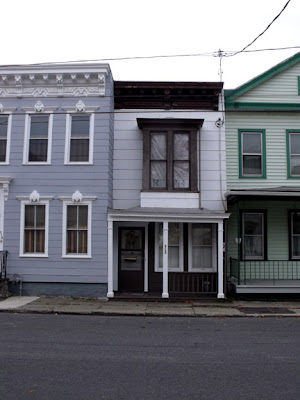 Notice that almost nothing lines up. While the bay window seems to be centered in the facade, the bracket above it, which one would expect would be centered, is several inches to the left (see below). Meanwhile, the middle porch column stands obtrusively in front of a window (I deleted it from the first image) and is even farther left of center than the roof bracket. And the left and right ends of the porch roof overhang differ from each other. 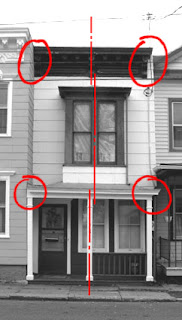 Why do such flaws occur? Why can't architects or builders get things lined up?

The reason is that when buildings abut, as they often do in urban environments, architectural features such as roof edges cannot turn the corner as they would on a freestanding house. The roof overhang on the front of this house couldn't be continued on the right side, because it would intrude on the neighboring house, which would create not only an aesthetic problem but a legal one. So the bracket on the right was pulled in a bit from the edge(below), even though the bracket at the left side is flush with the left edge of the house. To make the whole assemblage look more three dimensional, that is, to give a sense that at least part of the assembly turns the corner, the topmost molding was returned 90 degrees into the facade. 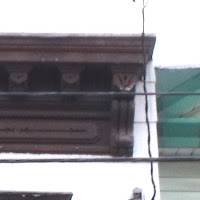 The abutment problem in urban places has a domino effect on the design of a facade: if you can't place a roof bracket quite where it wants to be, do you adjust all the brackets so they are evenly spaced, or do you let the spacing of the end one be mismatched? Do you place the windows so they align with the roof details or do you place them symmetrically in the facade without regard to the roof? Which "mistake" would be more or less noticeable?

No answers here, but on a completely different note, as I played with this facade, I found myself wanting to grow something out of the top of the bay. I had no idea why, until I realized that in removing a porch column I had turned the porch into a de facto table... a good place for a vase? 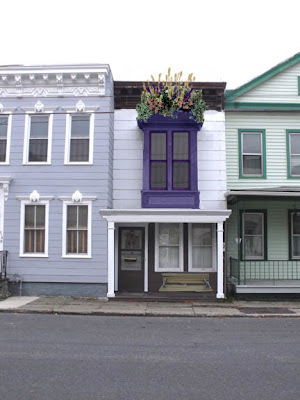 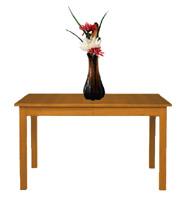 Mmm, maybe not.
Posted by Matthew Frederick at 9:53 PM 2 comments:

Having moved to the remarkable city of Hudson, New York two months ago, I will be using this blog to provide graphic and written commentary on the physical design and planning of my new home town. I am a practicing architect and urban designer, so I will aim to provide a professional perspective on topics from specific buildings or details (e.g., suggestions on improving an unattractive or underperforming storefront) to major projects and sites (e.g. Bliss Tower) to large-scale planning issues (the LWRP, truck route, open space, hospital growth, etc.). At other times I will offer a more general commentary on American urbanism, or I might discuss how architects and planners think about urban design problems. Along the way, I will be trying to get up to speed on Hudson's social and political terrain; I hope a few readers will show up and help me get this on straight.

My commentary won't be neutral, which no one in this city really seems to expect of those around them anyway. I like urbanism that is truly alive, and I err toward messiness over tidiness if it helps a city become a richer, more inclusive place. I love historic buildings, but I also believe in freedom of architectural expression--wouldn't it be better if people made good buildings on their own rather than being told how to do it by government?--and think Hudson would benefit from having a few provocative modernist buildings. I'm an outspoken advocate for home-based business enterprise, and I want to see more of Hudson's residents--particularly those on the economic margins--become business owners in their homes and economic players in the community.

Incidentally, I wrote a short article on Hudson for Architect magazine, a national publication, last year; you can read it here. I've already been told by one Hudsonite (Hudsonian?) that I got some things on wrong. I also wrote a piece on "messy urbanism" for Architecture Boston Magazine; it is here. And the next time you wander over to the Spotty Dog, you might see 101 Things I Learned in Architecture School or one of the other books in my 101 Things I Learned series... many thanks to Kelley Drahushuk for getting them in stock.

Thank you, Hudson, for reading. I am looking forward to getting to know you much better.
Posted by Matthew Frederick at 6:36 PM No comments: