Social Services moving out of Hudson?

According to Wednesday's Register-Star, the majority of the county's social services may be moving out of Hudson to the old WalMart on Fairview Avenue. Among the departments being relocated: Environmental Health; Mental Health; Healthcare Consortium; Office for the Aging; Planning/Tourism; Youth Bureau; Central Services with storage facilities; Department of Public Works/Facilities; DSS; Columbia Economic Development Corporation; Probation; Public Defender; County Historian, and Backup 911 Center. 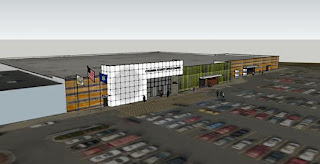 As a newcomer, I cannot see all sides of an issue as it affects Hudson. But it seems to me that the removal of several hundred jobs from Hudson will have an unfortunate echo effect on the city, our needy residents, and our economy. My guess is that Hudson, given its density, has the greatest concentration of the county's needy population. If social services move, our needy citizens will have to schlep out to the suburbs to get what they used to get within a few steps of home. Factor in the several hundred people working in social services, and some fundamental city dynamics will be altered. Imagine the negative impact on the local coffee shops and restaurants that serve these workers every day, and the decrease in commercial rents that will result from a glut of empty space.

There is a point to make here that may seem a bit abstract and even cynical, but my loathing of suburbs requires that I make it: Social service agencies exist to provide formal--that is, government sponsored--social benefit. This is a good thing, to the extent they provide things that society is not inclined to provide on its own (i.e., informally). However, urban places provide informal social benefits that suburbs absolutely cannot. In cities one can walk rather than drive to the ordinary needs of life, a benefit to the young, blind, poor, infirm, and elderly. Similarly, cities provide the able-bodied a greater opportunity than suburbs to stumble upon an odd job for a few dollars pay. Certainly, cities have their problems, but all in all they do things suburbs cannot do without cost to taxpayers.

Because suburbs are motivated by a desire to minimize social connectivity ("I like being out here, away from it all," is the suburban refrain), they quietly beget a need for formal government programs to do what they cannot do informally. Moving an agency and its people from a city to the suburbs makes the needy even needier because it simultaneously reduces society's ability to help them informally while physically distancing them from fomral services. It is a form of positive feedback loop, by which government justifies its continual enlargement: Government makes decisions that on the surface appear to make it more efficient, when they actually beget even more government. Witness an early echo effect of the proposed move: according to the Register-Star, the county will provide monies to Hudson businesses adversely affected by the removal of social services. “If businesses are hurt by the relocation of employees," says Ken Flood, county commissioner of planning and economic development, "I’ll provide necessary resources to help those businesses out.” These resources would come in the form of loans, technical advice, refinancing, and the like. Thus is a bad decision by government "solved" with more government.

Those wishing to contribute an opinion on the proposal are urged to attend a public session on December 8 at 5PM at the Elks’ Lodge on Harry Howard Avenue.
Posted by Matthew Frederick at 12:27 PM