The present is a particularly pregnant time for urban development in Hudson. Within the next several years, the following major projects could rise from the ground: a Hudson Senior Center (to be built as an addition to the Youth Center), a city police station, a city court, a consolidated headquarters for the Columbia County Department of Social Services (if the department stays in the city, as it should), a new parking garage (to serve social services and the general public), a new housing development to replace Bliss Tower, a new restaurant on the waterfront, and the restoration of Washington Hose. 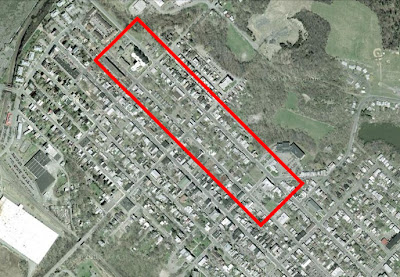 I think it likely that five of these projects--the police station, courthouse, social services, parking garage, and Bliss II--will be built within a several block area between Columbia and State Streets, from around First Street to just above Fourth. Their combined impact could be wonderful, but I have a sinking feeling that the default course of events will lead each project to be conceived and built in isolation from all the others. If so, in a few years we will be stuck with a number of aloof, oversized, badly designed buildings, and a permanent affliction of the What ifs. Many of us already know the feeling; it's the one we get when we walk past the Hudson City Center: it's in Hudson, but it isn't an integral part of Hudson's extraordinary fabric.

And if we do things right? Columbia, our most abused street despite being one very short block away from Warren, will become an asset to the urban experience of Hudson. Its toothless gaps will be filled by thoughtful buildings that shape the public realm, generate streetlife, and foster community. The Fourth Street axis from the county courthouse to the library will become an elegantly walkable procession. The Parc Foundation's pathway from lower Warren Street to Columbia Street will engage new buildings and become a highly trafficked, way cool pedestrian way. And the residents of our public housing, instead of dwelling in isolation, would have an opportunity to be far more active players in our community. (People living in towers do not interact with life on the street to the same degree that people in three story buildings do.)

Even a well sited, well designed parking garage could be an asset instead of the blighting bunker that garages usually are. For example, if the garage is located a little ways down the street from the social services building (instead of being right next to it or underneath it), the several hundred drivers arriving to it each morning will turn into several hundred pedestrians that need coffee, newspapers, and a drycleaning dropoff.

There are many more opportunities to discover, if a real masterplanning effort were to take place. To this end, I've been contacting as many of the parties involved in these projects as I can in the hope of encouraging a coordinated planning effort. If everyone is willing to step back and look at the big picture before plunging further ahead, each will get a much better project for their efforts. And the rest of us will get a better city, not just a handful of new buildings.
Posted by Matthew Frederick at 12:18 AM