"I think Hudson is turning a corner," a friend said at a party. "The people moving in here are really beginning to make a difference."

"I think Robinson is our next up and coming street," said an acquaintance at a community event. "It's the next street in Hudson to be discovered."

It's great to see houses and streets being improved, but statements such as these do not sit well with me. They are directed at the surface of things, and ignore the cultural realities taking place, or that could be taking place, beneath the surface renovation of bricks and mortar.

There are essentially two ways by which a depressed neighborhood may be physically improved. The first is the way to which we have become accustomed: people with wealth acquired elsewhere move into a neighborhood and fix it up. Stockbrokers and lawyers who make their living in Manhattan buy fixer-uppers in depressed areas of Brooklyn and Harlem. Wealthy high-tech workers from Google and Yahoo buy condos and buildings in overlooked neighborhoods of San Francisco, twenty-five miles north of their work, and motivate their improvement. State government workers in Albany purchase and renovate inexpensive housing in Hudson, while continuing to commute to work in the state capital. Or as has become perhaps more common in Hudson, wealthy Manhattanites purchase and renovate second homes here, and turn them into vacation outposts while conducting the bulk of their lives elsewhere. 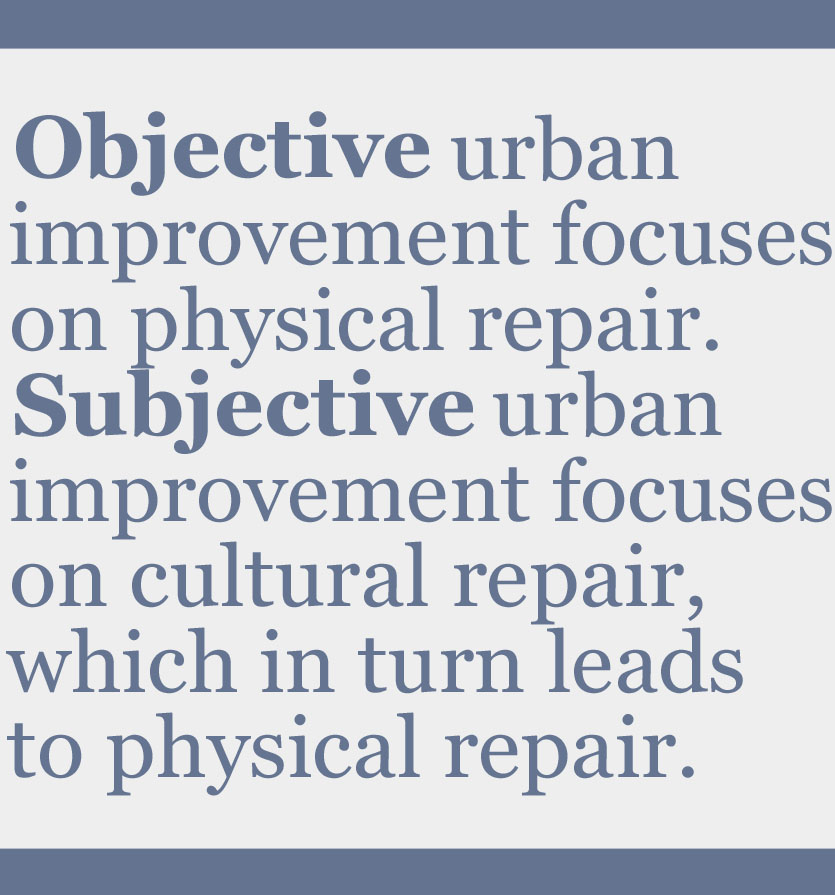 The second way a neighborhood is improved is when the people already there experience improved financial fortune, and in turn fix up their homes and business establishments. Of the two models, I believe this is the more genuine one, even if its physical results are indistinguishable (by some) from the first. The first model, which I call an objective model of urban improvement, is directed at the physical repair of a place, while the second, subjective model seeks to motivate the physical repair of a place as a byproduct of cultural repair.

Hudsonians who are satisfied with the first model are being very short sighted about our city, about the urban problem generally, and about the causes of and cures for America's cultural ills. They don't understand that, comparatively speaking, one isn't repairing much of significance if all he repairs is a building. They don't understand that the embedded problems of a culture are not being addressed when struggling people are forced out of a neighborhood and out of a city just so its buildings can be renovated. All this does is put Hudson on the winning side of a zero-sum game. But so what? these folks seem to think; that is a problem for Troy or Albany or Schenectady to figure out.

But I will admit that my friends are right about one thing: the people moving into Hudson are making a difference. They indeed are.
Posted by Matthew Frederick at 6:06 AM