Last weekend we headed upstate to visit family and friends. We paid a visit to our friend Peter, an organic farmer with a fondness for experimentation. He showed us some crops we had never heard of and a few we had heard of but had never seen up close, such as flax. Peter doesn't farm any animals, but he keeps some interesting beasts around. His pet buffalo Annie is very shy. She came out of the barn only with some gentle nudging from Peter. 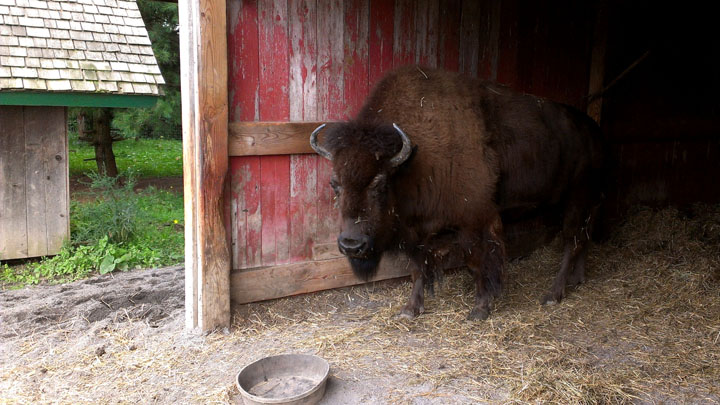 Annie is about two-thirds the size she should be due to an infection in her youth. A large buffalo weighs twice the average horse, but Annie is about the same size as her friend Crowbait, a smaller than average equine. The angle of this picture makes Annie look smaller still. 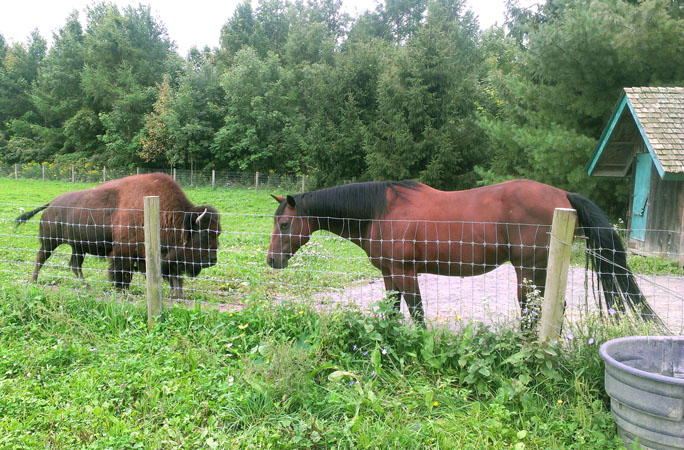 A barn on the farm dated to 1810. My phone battery died, so the only pictures I got were of the interior. One of the original hand-hewn beams is visible at the very top of the photos below. The lighter colored beam was installed more recently to support a loft. A friend of Peter's did the carvings. From left to right are Crowbait the horse, an unidentified chicken, Annie the buffalo, and my favorite, Chester the raccoon. Peter raised Chester after finding him last year as a orphaned baby. He became the family pet and took to following Peter around the farm. When Peter performs repairs at his workbench, Chester picks up whatever tools are nearby and mimics his activities.

Recently, Chester went AWOL. After several days, he showed up at the barn looking surprisingly healthy. He had gained a few pounds and his coat was luxuriant. However, he was acting oddly, which led Peter to suspect he had been poisoned. Peter forced a charcoal pill down his throat to absorb any toxins. Then Chester bit Peter—hard. Peter rushed Chester to a veterinarian, who sensed that something else was amiss. A look under the hood revealed that Peter had medicated a wild female raccoon. Sadly, "Chesterina" did not recover from whatever was ailing her, but we're happy to report that Chester has found a new girlfriend, "Chesterella," and Peter is doing well following his rabies shot.

Before returning to home base we swung through Wolcott, New York to get a look at the Venus statue in the town center. It is reported to be a twin to Hudson's Venus, which has been in storage, long hidden from the public eye. Fortunately, my camera came to life for one last shot. Unfortunately, the Wolcott Venus was a little disappointing up close. Here's hoping Hudson got the better looking sister.

Posted by Matthew Frederick at 10:01 AM