Will they stay or will they go?

A look at some possible sites for Columbia County offices
Because of—or perhaps despite—recent events having made the intentions of Columbia County officials cloudier than they already were, I decided to take a look at sites within Hudson that might be suited to new county offices. The county estimates it needs about 100,000 square feet of space, and likely a parking garage for about 200 workers. I haven't been systematic in my site search or analysis, I've been partial to sites located within or immediately adjacent to the grid where street life stands to most benefit, and I might be engaged in a colossal waste of time, but here goes.

1. X-tyal site. This waterfront site, with a new building complementing the existing large brick warehouse, could make for a very attractive project. (Note: the foreground building in photo has been demolished but the one at left remains.) However, the owner may have a more commercial use in mind. From an urbanistic perspective, the city might not get much bang for the buck here, as whatever benefit county offices might bring would be limited by the fact that the city fabric barely touches the site. The success of a project here probably would depend on the development of a holistic vision for this part of the city, incorporating Bliss redevelopment and other projects. 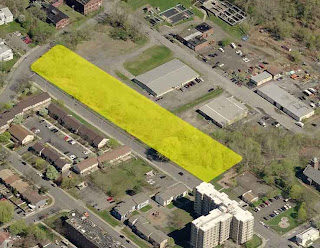 2. Empty parcel, north side of State Street. I think the western part of this site belongs to the city, the rest to the Hudson Housing Authority. HHA has suggested locating a portion of the Bliss redevelopment on the parking lot at lower right, and also has expressed interest in building at Front and State (upper left of yellow area). However, the Bliss situation is fluid, so this site may be available for development. A building here would make State Street a somewhat more proper two-sided street, although the weak suburban housing on the south side is far from ideal. The site slopes fairly steeply in the rear, which would allow concealment of a parking garage. 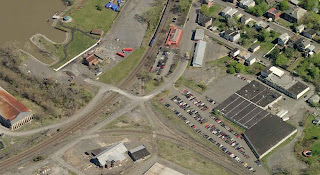 3. Riverfront industrial area. I don't have a specific site in mind here. The area is so shapeless that it's difficult to know what a large county building would mean or where it would go. But the train station and Eric Galloway's proposed restaurant need neighbors, and additional new buildings are going to have to be built somewhere if the riverfront is to have the activity that many are envisioning. 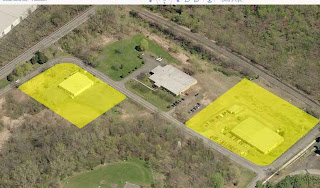 4. Power Avenue. Two buildings in this declining industrial area are on the market. The sites appear large but they are removed from the waterfront and the life of Hudson, making these locations unappealing. However, their isolation might be precisely the thing that appeals to an apparent suburban preference among county officials. 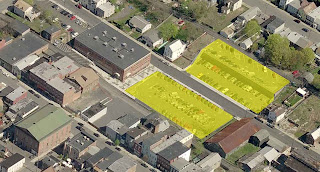 5. 300 block of Columbia Street. This is an interesting location for a few reasons. It's a block from Warren Street and the Opera House. One parcel, now a parking lot, is adjacent to the existing 30,000 s.f. Columbia County Mental Health—er, Behavioral Services—Building. The Parc Foundation linear park would run between it and a new county building as continues to State Street; handled properly, this could be a dynamic space. Across Columbia Street, an existing tiered parking lot could be the site of another office building or garage. But are these sites large enough to give the county an additional 70,000 s.f. plus parking?

6. Multiple sites near 4th and Columbia. I find this location very interesting, as it offers a potential synergy between county offices and a future city police station, court, and parking garage. Also, it lies near Time and Space Limited, Helsinki, Musica, and the library, as well as the aforementioned sites in the 300 block of Columbia site. All in all, the location offers a wealth of space and flexibility.
Three to five parcels are involved, depending on how the counting is done. A former school building at the southern corner of 4th and State is currently occupied by the county, and this would presumably be incorporated into an overall development scenario. The empty parcel at the west corner of 4th and State is city owned, and the empty parcel at 4th and Columbia north is owned by Eric Galloway. The latter parcel was at one time the subject of a discussed land swap with the city, for a police station. At the east corner of 4th and Columbia is a county parking lot, with a private parking lot adjacent, owned by Time and Space Limited.

It should be easy to provide the desired 100,000 s.f. in this area via several smaller buildings that would be appropriate in scale for Hudson. The county, if compelled to use separate buildings, would like them to be linked. This should be done with underground passages (city infrastructure allowing) rather than overhead bridges, which improperly territorialize public streets.

7. Municipal parking lot and former shirt factory. The parking lot looks to be in excess of 40,000 s.f., while the shirt factory, currently for sale, is listed as 22,000 s.f. interior space. It's in the heart of the city, which from an urbanistic perspective is either ideal (right where the action is) or not so ideal (better to put the county in a dead spot to give it life). 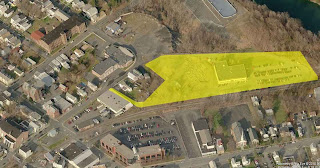 8. Railroad Avenue. County Social Services are currently located in an existing 28,000 s.f. building on this site; presumably it would receive a very large addition. However, despite appearing fairly large, the site is long and narrow, which may make it difficult to develop more intensively. Also, a large building might have an undesirable visual impact on Oakdale Lake, adjacent. And somewhat like the X-tyal site, this site hardly interfaces with the city fabric, thereby limiting its benefits to Hudson.
I will look at these sites in greater detail as I am able. If I've missed some worthy candidates, please let me know.
Posted by Matthew Frederick at 4:41 PM