Keeping the county in the city: a closer look at Site #5
Here's a somewhat closer look at a potential buildout for county offices in the 300 block of Columbia Street (Site #5 on my recent post.). This is a particularly prominent and complex site with significant design challenges. It consists of two parcels bisected by Columbia street. The southern parcel lies adjacent to the PARC Foundation pedestrian way and is quite visible from Warren Street. Any building constructed here would have to bear significant civic weight, as it would lie on axis with City Hall Place and the Opera House.

The northern parcel also abuts the "PARCway," although it appears that the park has not been fully developed at this location. The parcel is somewhat less prominent than its southern companion, but also presents significant design challenges. The grade on the back/alley side is two stories higher than Columbia street, which would make it difficult to get adequate daylight into a building interior. This, combined with the possibility of using the sloping grade to conceal part of the building mass, suggests it might be more suited to a parking garage. However, this would still introduce a scale problem vis-à-vis the handful of wood frame houses nearby.

This exercise, however, is charged with the simpler task of determining if the site offers adequate space for a new Columbia County headquarters. Given that it is located adjacent to an existing 30,000 s.f. county building, it has a bit of a head start on the 100,000 s.f. target. However, with a garage on the northern parcel and a 3-story office building to the south, the scheme falls about 25,000 s.f. short. A 4-story building might produce enough space but almost certainly would be too massive. An alternative would be to build an additional office building on the northern parcel (assuming the daylighting problem could be solved), and to site a garage somewhere nearby. 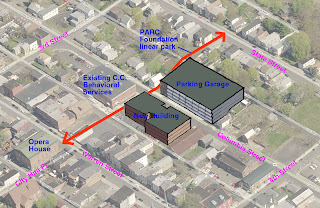 I wouldn't rule this site out for county offices, but given its complexity, it can be properly analyzed only in context with other nearby sites and other city development needs. Its civic visibility and size might make it more suited to a police station or courthouse than to county administration. Too, there has been talk of creating separate senior housing when the Bliss public housing project is redeveloped. Perhaps one of these parcels would prove suitable.
Posted by Matthew Frederick at 2:42 PM